When discussing code with others, effective communication is key. It's important to be able to speak in high-level terms without stopping to thoroughly explain each concept mentioned. To aid in this, developers make use of language-specific idioms, refer to common stylistic themes as patterns and anti-patterns, and sidestep common pitfalls by avoiding code smells. Another common tool used when discussing performance optimization is Big O notation, written in the format O(n).

Big O notation may seem scary or unapproachable at first to many developers, largely due to its roots in mathematical notation and lack of any real implicit meaning, but in practice it is much less difficult to use.

Big O notation is used to describe the performance of a block of code, and more specifically how the performance will change in proportion to the size of the input dataset. While there are many complex use cases for this notation, we'll just go over the most common instances and give an example of what each would look like in the Real World™.

In this notation, the value inside the O( and ) describes the performance. When you see an n, know that it represents the size of the incoming dataset. Big O notation describes the theoretical limits of performance, which is generally equivalent to the worst-case performance. This means that the code may not always perform as described by Big O, but it will never perform any worse. If that doesn't make any sense, store it away and keep reading, it will soon enough.

In JavaScript, array member access takes constant time since JS arrays are stored continuously in memory. To find the ith element in an array, we just take the memory address of the 0th element and add i times the size of a single element in the array. No matter how large i is or how large the incoming array is, we still perform this one single calculation. 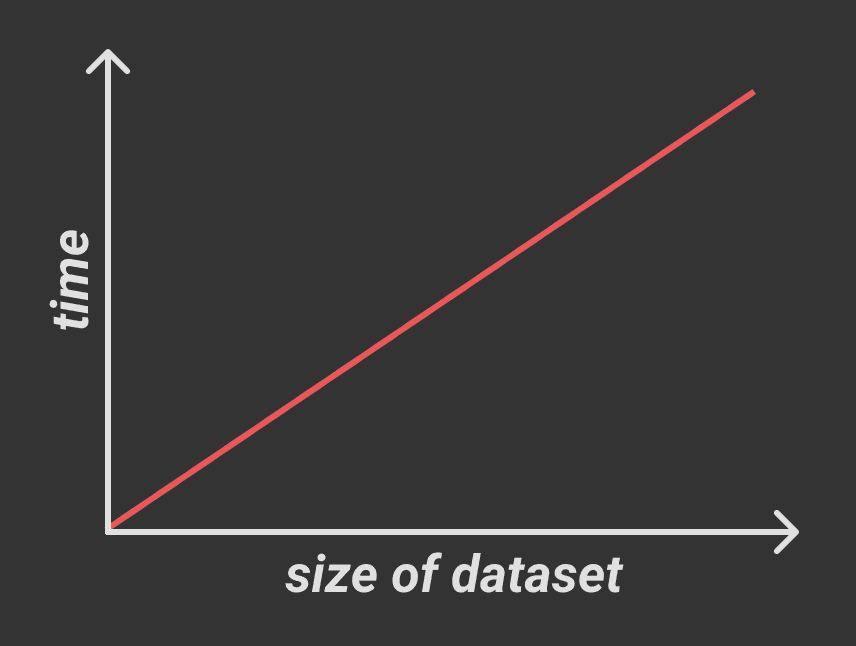 Finding an array member matching a predicate takes linear time since we need to iterate over every item in the array.

What if the matching item is at the beginning of the array? As I said earlier, Big O notation describes worst-case performance, meaning sometimes the code will run better than it describes. If the array contains 100 elements, this function will never run more than 100 iterations, so O(n) means that the function will never take more than n iterations to complete, where n is the size of the incoming dataset.

In exponential time, performance time increases directly in proportion to the square of the size of the incoming dataset. 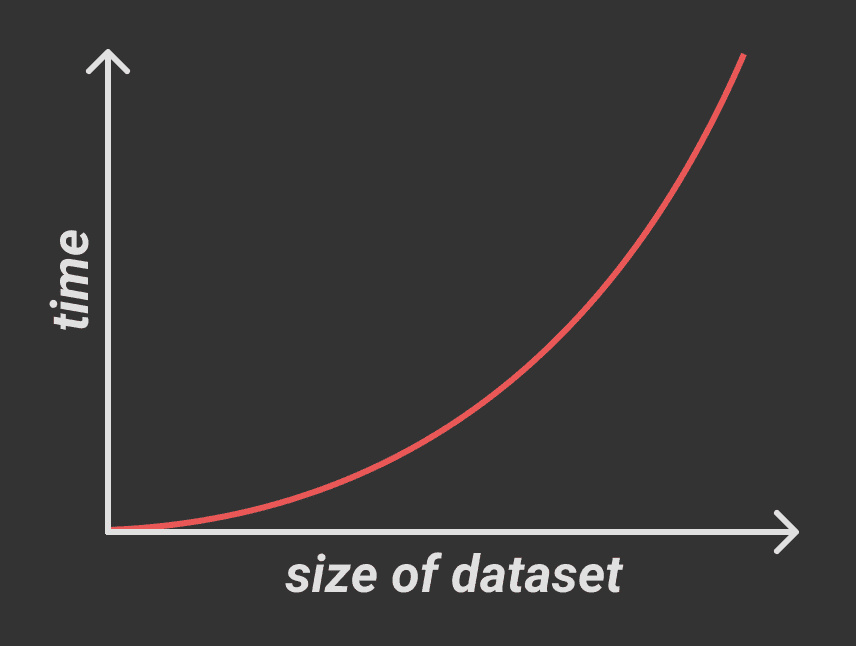 In logarithmic time, performance time increases directly in proportion to the log of the size of the incoming dataset. 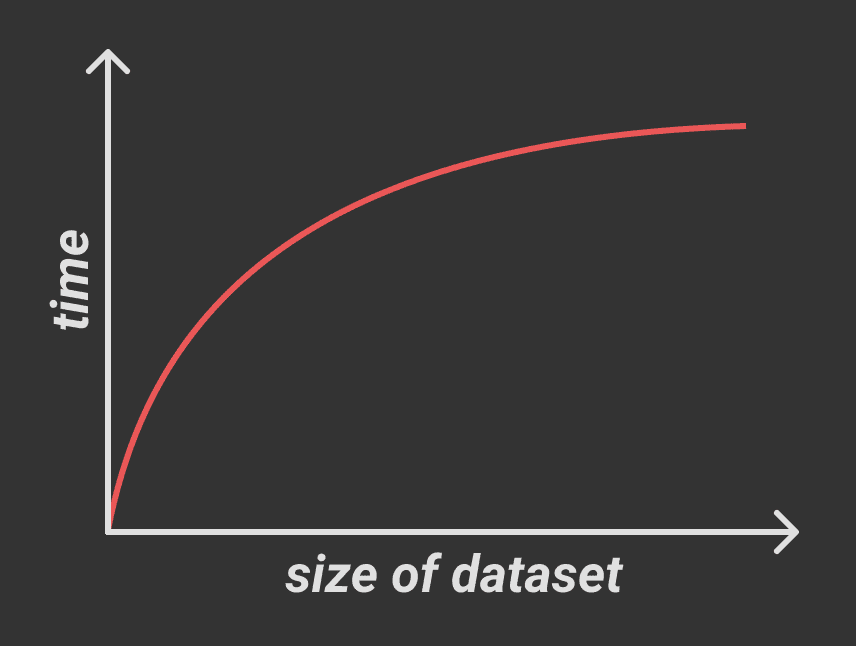 Unlike the previous performance models, logarithmic time doesn't perform particularly well on small datasets but instead shines when dealing with large datasets. As you can see in the graph above, as the size of the dataset increases, logarithmic time approaches constant time performance. This is generally found when using algorithms that recursively halve the problem into smaller problems and solve them instead, such as binary search:

This performance doesn't have any specific name, but it appears commonly enough to warrant mentioning. In this time, performance time increases directly in proportion to 2 raised to the size of the incoming dataset. You'll recognize this chart as the graph for O(log(n)) rotated 90°: 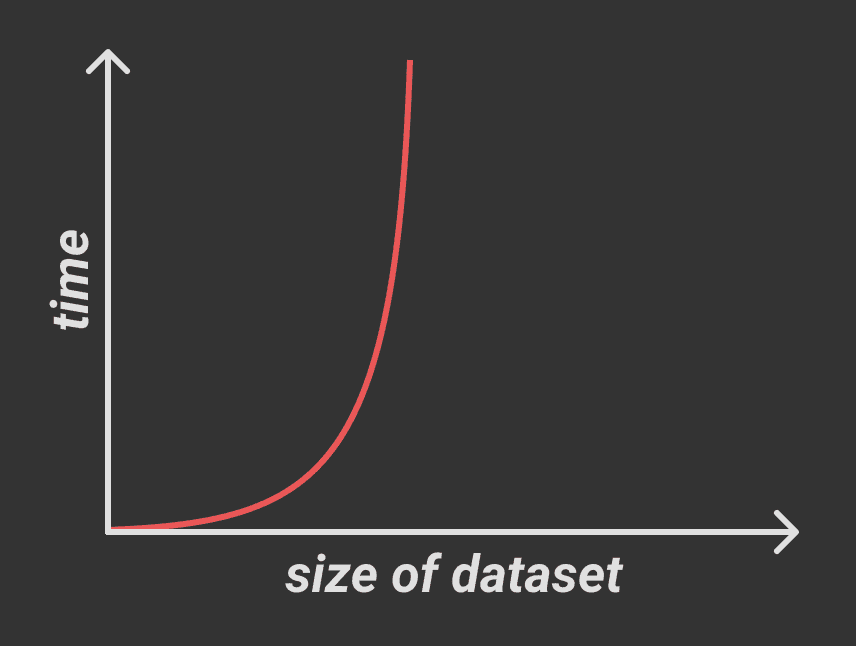 This performance can be observed in the following Fibonacci number generator:

Performance approaches infinity (x = 0) in the same way that O(log(n)) code approaches constant time (y = 0) as the incoming dataset gets larger. For very small/efficient code, this is an acceptable way to express lengthy calculations succinctly, but caution should be used since is a prime candidate for bottlenecking.

Most of these examples are a bit contrived, but it's important to be able to identify the structures that cause suboptimal performance even when they're masked by context. It's also important to know when certain problematic performance models are acceptable, and when to prefer one model over another. In general:

Special thanks to this article by Rob Bell for providing clear examples of the less common performance times.